Donald Trump’s travel ban: The US appeals court hearing and what happens next 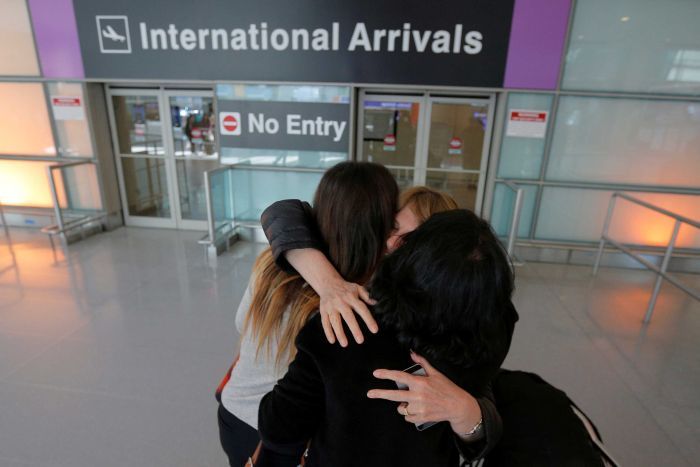 A US appeals court has heard arguments over whether to reinstate President Donald Trump’s ban on travellers from seven predominantly Muslim nations.

The judges said they would announce their decision “as soon as possible” — but earlier a court spokesman said it was likely to make a ruling this week.

Right now there’s a freeze on the travel ban. That means refugees and travellers from the seven listed countries can enter the US.

And that’s because last week a federal judge temporarily blocked the executive order.

The Trump administration wants that decision overturned (allowing the travel ban to continue) while legal action against the ban itself, brought by the states of Minnesota and Washington, is underway.

So what happened today?

There was a hearing before three judges from the San Francisco-based 9th Circuit Court of Appeals.

The Justice Department, representing the Trump administration, wants the executive order to be restored immediately.

It argues the President alone has the power to decide who can enter or stay in the US.

For the other side, lawyers from Minnesota and Washington want the suspension of the travel ban to continue while their lawsuit moves through the legal system.

The states argue the ban is unconstitutional.

Who’s affected by the travel ban?

What was said at the hearing?

The Justice Department’s lawyers were asked if the Government had any evidence connecting the seven nations to terrorism.

August Flentje, arguing for the Justice Department, told the judges the case was moving fast and the Government had not yet included evidence to support the ban.

But he added both Congress and the administration had determined those seven countries posed the greatest risk of terrorism and had in the past put stricter visa requirements on them.

The lawyers representing the states were pushed for evidence that the ban discriminated against Muslims.

“I don’t think allegations cut it at this stage,” Judge Richard Clifton said.

Noah Purcell, Washington’s solicitor-general, cited public statements by Mr Trump calling for a ban on the entry of Muslims to the US.

He said the states didn’t have to show every Muslim was harmed, only that the ban was motivated by religious discrimination.

What does the ban mean?

As mentioned, the judges’ decision is expected later this week.

If they side with the Justice Department, the travel ban will be reinstated.

If they side with the states, the suspension of the ban will remain.

Regardless, the battle between the department and the states (which is backed by a host of tech companies) will continue through the courts.

And whatever the judges eventually decide on the suspension of the travel ban, either side can ask the Supreme Court to intervene.

Mr Trump has said he would take his fight to the Supreme Court if necessary.

“While everyone is talking and dealing, a lot of bad people are thinking, ‘Hey, let’s go in right now’,” he said.

Just cannot believe a judge would put our country in such peril. If something happens blame him and court system. People pouring in. Bad!

Could it reach the Supreme Court?

Well, how and when a case might get to the Supreme Court is still not clear.

The travel ban itself was set to expire in 90 days (from when it was signed), meaning it could run its course before a higher court takes up the issue.

Or the Trump administration could change it in any number of ways that would keep the issue alive.

If the case does end up before the Supreme Court, there is still a 4-4 split of justices.

Mr Trump’s pick to fill the vacancy left by the death of Justice Antonin Scalia last year, Neil Gorsuch, is yet to even start the confirmation process.

The last immigration case that reached the Supreme Court ended in a 4-4 tie.

When this happens, the lower court’s decision stands.

This Travel Forecast Should Worry Anyone With Global Attendance
May 23, 2017

How Will Europe’s New MedTech Guidelines Affect Your Meetings?
May 4, 2017